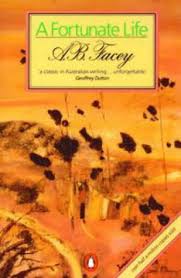 I was listening to radio national yesterday and the memoir, A Fortunate Life, by AB Facey was mentioned. Those who watch First Tuesday Book Club would have seen A Fortunate Life come in at number three on their Ten Aussie Books to Read Before You Die list. If I remember correctly they said it was not very well written, but it really showed the horrors of war experienced by Facey. At the time, I thought it might be a book worth reading to get an accurate picture of what it was like at Gallipolli.

Evidentially, Facey claims in the memoir that he was one of the first soldiers ashore at Gallipoli, and came under heavy machine gun fire.

But according to historian Chris Roberts, a retired Brigadier, Facey’s account only perpetuates one of the myths about the landing at Gallipoli.  In Chris Robert's book The Landing at Anzac 1915 he writes that the landing "was not a bloody landing under murderous fire", and that the beach was "not an inferno of bursting shells and barbed wire". In fact the first troops to land at Gallipoli only had to withstand sporadic rifle fire according to the diaries of a few soldiers who were actually there.  Evidentially the film Gallipoli also perpetuates the myth.

Roberts then says that Facey's account of his arrival and wounding at Gallipoli is a fabrication. War records reveal that Facey arrived on the 7th of May, 12 days after the first landing. Facey also writes he was horribly wounded, his records reveal no such injury. If this is true, how much more of the memoir is a fabrication? If this is true, shame on you AB Facey. Myths about war only perpetuate war.

I recall watching a Four Corners program, many years ago about Gallipoli. In that program it said that the invading Anzacs troops at Gallipoli on the first day, suffered little resistance and rushed inland, but then they stopped for the day instead of taking the high ground. I particularly remember an interview with a pissed off New Zealander, blaming lazy Australians for stopping. But then, we like to blame the British.

In the radio national program, Chris Roberts confirmed that the troops stopped before reaching higher ground. The Turks then finally arrived and set up their machine guns on that higher ground. If the Anzacs had kept on going and dug in on the high ground, then Gallipoli might not have been the military disaster it was.

Chris Roberts is a retired Brigadier who served in Vietnam, he later commanded the SAS Regiment and Northern Command and holds an honours degree in history.

Anyway, I won’t be reading A Fortunate Life. I am sick of soldiers and politicians lying about war. If all children were taught the truth about war and why they happened, then they probably would rarely occur. Instead we see them dragged along to dawn services by their parents so they can earnestly parrot to any media that “they died so we could be free.” Which has me yelling at the television: besides the second world war, which other war was our freedom threatened?
Posted by Graham Clements at 9:52 PM 35 comments: Links to this post

Confessions of a Tired (Aspirational) Writer.

A couple of weeks ago week I joined a Facebook page for people, like me, with ulcerative colitis or Crohns disease.  I found that those with either disease usually have other chronic health problems. I seem to be one of the “lucky” ones. Since “catching” ulcerative colitis about 15 years ago, all I have had to suffer was kidney stones and cataract surgery on my eyes, as well as low-level asthma, and being diagnosed with diabetes a couple of years ago. Others in the group have had much worse, including major bowel and colon surgery and nearly dying from their illness. But one thing is consistent, just about all of them, like me, report being constantly tired.

I exercise a lot; far more than the average person I reckon. For most of the past 12 years I have swum three kilometres three times a week. I also lift weights on three of the other days and do exercises, as well as walk around 25 kilometres a week. I also spend about an hour a day in the garden. So maybe it is all the exercise that is making me tired.

I just finished writing chapter 94. I have now written 185,792 words of the novel and I am positive I have less than 10,000 words to write. But since I completed National Novel Writing Month in November last year, with a respectable, if rushed, 50,000 words for the month, my word total per month has dropped drastically:

That is not anywhere near enough for someone who aspires to being a published author.

I have also written one article for Divine this year, although I have had two published:

I have spent a bit of time trying to promote Divine to the world, including setting up a community for Divine on Google+. Joining Google+ has caused me to spend a lot more time on social media.

I have written a blog post every week this year, except for one. I have been trying to make the posts more interesting, which has required a bit more research and thought for each post.

I have not critiqued anything this year. How can I expect others to critique my work when I don’t critique theirs?

I am reading nowhere near enough. I have only read four books this year. The problem is I am too tired at night when I do all of my book reading.

So I have just started a gluten-free diet in an attempt to see if gluten might be contributing to my tiredness. I went gluten-free for nearly a decade before I came down with ulcerative colitis and I rarely remember feeling tired then, certainly not this tired.
Posted by Graham Clements at 12:05 AM 7 comments: Links to this post

Last week I read a press release announcing the BBC was remaking Blake’s Seven. The press release says: “Joe Pokaski and Martin Campbell have worked tirelessly with the Georgeville TV team to create an amazeballs reboot of this classic space opera...”  Amazeballs? WTF? I was debating whether this was a typo or some new term used in the media when Adrian Bedford, a man more up to date with language than I am, told me that it was a new term used on the internet to express excitement and enthusiasm. I had never heard it before, but that very night I heard it used in a television commercial. So I had to look it up.

According to the Urban Dictionary, amazeballs “is some annoying term Perez Hilton keeps trying to make happen, by saying it repeatedly, even though it makes no sense, and getting twitter followers to try and make it a trending topic, to make himself more famous for no reason.” It goes on to say “The fact that someone like Perez Hilton can make six figures by being an annoying douchebag is amazeballs.”

But that is not quite true, according to Slate, the originator of the term appears to be fashion blogger Elizabeth Spiridakis. Who would want to claim credit for such a grating nonsensical term? And who would want to use it? In my opinion anyone who uses it is just a ewebumsucker. Pronounced u-bum-sucker. Think sheep and brain nosing. Feel free to spread the term.

Now we get to the typo. In a status update in Facebook last week when referring to Gina Rinehart, I misspelt her surname Rinehardt. A typo? Or had I subconsciously equated her with one of the main vampires called Rinehardt in Justin Cronin’s novel, The Twelve?

This typo alerted me to the fact that The Twelve could be seen as a parable for the Australian mining industry. In The Twelve, the lead vampires have bitten and turned millions of followers, a bit like our mining magnates who have bitten all those mining workers with the greed to dig up all of the ore until there is no more.

The lead vampires and their followers (nicknamed dopeys) kill nearly all of the humans in North America. That means the vampires nearly run out of their much needed resource, blood. The twelve lead vampires then desert their followers, who are left to wonder thirsty and aimless until they mass suicide.

So what will happen in Australia when the ore runs out and there is nothing left to mine, or if the world actually does something about global warming and no longer wants our coal? I keep on wondering who will buy those million dollar homes in Perth when there are no more mine workers.

So, are mine workers and the majority of the Australian public, Rinehardt’s amazeball ewebumsuckers?
Posted by Graham Clements at 5:47 PM 1 comment: Links to this post

The New Yorker Rejects a Story it had Already Published.

I recently read a very funny article where writer David Cameron “grabbed a New Yorker story off the web, copied it into a Word document, changed only the title, created a fictitious author identity, and submitted it to a slew of literary journals”. His letter simply stated that he was unpublished writer who was deeply appreciative of their consideration.

Every single magazine, including the New Yorker itself, rejected the story. Just to be sure, Cameron choose another story from the New Yorker and did it again, with the same result.

A writer’s immediate reaction might be ah-huh, those magazine editors don’t have a clue what good writing is. But there is no indication in the article that the editors actually read the story. As he says all he received back was boilerplate replies of “good luck placing your work elsewhere”.

And why should they have read it? After all, these magazines probably receive a lot of stories from name authors. Stories from a well-known author will help them sell their magazines.

David Cameron offers no analysis of why the story was rejected. Well I reckon most probably the attachment to the email was never opened. He was rejected because of his lack of sales pull.

I used to buy speculative fiction magazines and still buy the occasional best of speculative fiction anthologies. I did/do not buy them because of the authors listed on the front of the cover. In fact, I often sneer: not him/her again, as I am not a fan of their obscure stories. I often find the stories from authors I have heard of are usually the weakest in these collections. The one exception has been Greg Egan, whose complex stories always intrigue and delight me.

Generally the best stories in the collections are from authors I have never of, as they have gotten into the collection on merit. They have survived the slush-pile and been enthusiastically endorsed by a number of readers. Whereas the name writer was probably asked to submit a story – and the editor did not want to offend by telling them that their story sucked. Besides it will get people reading the magazine or anthology.

So if your stories are constantly being rejected unread by magazines, change your name to Stephen King or better still Greg Egan.  Then your story might be rejected on the writing.
Posted by Graham Clements at 10:28 PM 8 comments: Links to this post