A review of Max Barry's Lexicon 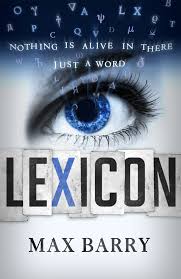 Max Barry’s Lexicon became a must buy after I heard the author read part of its frenetic and humorous opening at last year’s Melbourne Writers Festival.

The novel has a wonderful premise. It is set in a world where poets and the words they use can be deadly weapons. Poets use their words to compromise people and force them do their bidding. But it is not as easy as just saying a few words, a poet first has to establish the personality traits of their victim to know which words will control them.

The story begins with Wil Parke having a needle shoved in his eye by two thugs who have dragged him into an airport toilet. He has no idea what they want from him, but decides he better keep still. Meanwhile, Emily Ruff , a young hustler, is accosted by one of her potential marks. He compromises her and she winds up in the poet’s training academy.

Their stories unfold in alternating chapters, as the stakes increase. It is clear that at some point their stories will have to connect, but that connection does not come as a revelation, it is more of a slow reveal that occurs as the novel charges from one tension filled page to the next. It’s a page turner, with two engaging central characters whose plight embraces a reader’s empathy.

Lexicon was voted the fourth favourite science-fiction/fantasy book on Goodreads last year. It was also included in a list of the best books of 2013 that you have never heard of in, an article in the Melbourne Age. It recently won the Aurealis award for best Australian science-fiction novel.

Lexicon is a great science-fiction/fantasy novel. One of the best written by an Australian. Its original premise takes readers on one fantastic road trip to a totally satisfying conclusion. The novel had me wanting to visit Broken Hill before the poets arrive.
Posted by Graham Clements at 10:08 PM 4 comments: Links to this post


I came across a post about the recently awarded Nebula awards the other day. I was curious how close its short-list of nominees for the best science-fiction/fantasy novel of 2013 matched those of other awards, so I had a look.

They didn’t match at all. Only one novel made it onto more than one list: Ancillary Justice by Ann Leckie, which made it on to all three of the award short-lists.

So why didn’t any other novel make more than one short-list? Probably because of the way they are nominated.

How are the Novels Nominated?

The Nebulas are nominated and voted on by members the Science Fiction Writers of America. Membership of the SFWA is restricted to published authors, including people who have sold at least three short stories to professional markets. Reviewers and scriptwriters can also become members. The nominated books must have been first published in America in the nomination year.

Anyone who buys a membership to World Con can nominate novels and vote for the Hugos. This year’s World Con is in London. Anyone going to Loncon3 could nominate novels that were published anywhere in the world in 2013.

Novels are submitted by their publishing company for the Arthur C. Clark award. Members of its judging panel and organisation committee can also nominate novels. This year's award was judged by Ian Whates and Duncan Lawie from the British Science Fiction Association, Sarah Brown and Lesley Hall from the Science Fiction Foundation and Georgie Knight from the Sci-Fi-London film festival. The nominated books must have been published in the UK in the nomination year.

Depending on the judges for the Arthur C. Clarke award, it or the Nebula award would have better qualified judges than the Hugo award. But the Hugo is open to nominations of books from all around the world, including non-English written books.

Whose Judgement to Trust?

I wonder how many of the short-listed novels are read by those who vote. I would expect the judges of the Arthur C. Clarke award to read all the short-listed novels. I would imagine that the authors of SFWA would try to read many of the nominated novels before they voted for the Nebula. But for the Hugos, I doubt whether many of the general public who travel to Loncon3 will read more than one or two of the novels, if any. When I went to Aussiecon I did not read any of the nominated novels, so I did not vote for that part of the Hugos.

Due to the different nomination and voting processes, Spock would give more credence to the Nebula and Arthur C. Clarke awards, until he found out no Vulcan literature would be accepted for them.

Whose judgement do I trust?

I had a look at the past winners of the awards. I have not read many of the winners due to my concentrating on reading Australian authors. And only one of them, George Turner, has won any of the three awards. My favourite international authors do not seem to have won many awards either.

Ancillary Justice by Ann Leckie won the Nebula and Arthur C. Clarke awards. I must get a copy. Will it win the Hugo?

Posted by Graham Clements at 11:19 PM 4 comments: Links to this post

The Budget or Mad Max, Here We Come.


I have been very distracted over the past couple of weeks by the Australian Government’s budget. I worried about what the Government might cut, and how it might affect the poor. My concerns were realised when the Government produced a horror budget that attacks Australia’s most vulnerable.

The budget’s most appalling measure is that people aged 25 to 30 will have to wait six months to claim unemployment benefits, then be kicked off them after six months and have to wait another six months before they can get back onto them. Imagine the stress of having to live on nothing if you had no family to fall back on. A 25 to 30 year old who moved to the city to work and lost that job would probably have to move back home again.

The government wants to introduce a seven dollar co-payment for doctor appointments. Seven dollars can be a lot of money to the poor. This appears to be an attempt to destroy the universality of the Medicare scheme. A scheme that was designed to provide quality free health care to all.

The government wants to cut university funding by 20% and then let the universities charge whatever fees they like. This will leave universities little choice but to put up fees, massively. It will make university less affordable and leave students with greater debts when they finish. Imagine if you started a course and then were incapable of finishing it. I predict the collapse of Victoria University due to a lack of students.

The government wants to cut $80 billion out of the health and education budgets of the states over the next decade. It appears to be an attempt to get the states to demand that the government increase the GST, which it would obviously be happy to do. The GST is a regressive tax that hits the poor harder than the better off.

The reduction of family tax benefits will massively hurt many.

I am not so fussed about the fuel excise increase, which will add only about one cent a litre per year to the price of petrol. And I really think anyone earning over $180,000 who can’t afford the debt levy needs to seriously look at their spending.

One strange thing about the budget is that the government has stopped funding the energy discounts for pensioners. This is after them repeatedly screaming before the last election that the carbon tax was hurting the ability of pensioners to pay their energy bills. The pensioners will be much more impacted by the end of the discount then they are by the carbon tax, which they received supplementary payments for.

Why does the Federal Government want to do this? Evidently we have a budget emergency, even though our budget deficit as a percentage of GDP is just about the lowest in the western world.

If there was such a drastic need to cut spending in a hurry than why get rid of the half billion dollars or so the mining tax brings in? Or the $6.7 billion the carbon tax makes. Why use the $7 Medicare co-payments to create a research fund instead of using it to pay off debt? (Obviously to try and wedge the opposition by saying they don’t want to fund research.)  And why are does the government want to spend billions on a gold plated maternity leave scheme when there is already a pretty good Labour scheme?

This is not a budget designed to fix the budget deficit, it is an ideological budget designed to hit those people and institutions like the CSIRO and the ABC whose views and lifestyles differ from the rich white men who are currently running the government.

It is a budget designed to please Rupert Murdoch who tweeted after the coalition won the last election that now it was time to cut all the welfare fraud.

It is a budget that will divide Australians into two classes, the very rich, and the rest of us. I hope many in the rest of us underclass wake up before they lose their lifestyles, and vote those rich white men who have no empathy for them out.

If the measures in this budget go through, I predict a very different Australia in the future. A land of security guards protecting gated communities as crime rates sour. A land were illiteracy flourishes. A land where anyone born poor will stay poor.  A land where people die in the streets from lack of medical care.  A land of hatred and confrontation. Mad Max, here we come.

Next week I hope my mind will be back on to science fiction and writing.
Posted by Graham Clements at 10:38 PM 4 comments: Links to this post