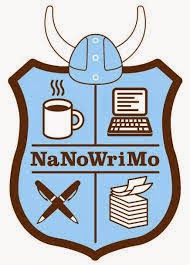 I have decided to do National Novel Writing Month once more. I successfully completed it in 2011 and 2012. The aim of NaNoWriMo is to write a 50,000 word novel in November. My main reason for doing NaNoWriMo again is to motivate myself. Apart from the actual month, I know from previous years that my writing output is greater in the months after NaNoWriMo.

What Will I Write?

I intend to resurrect one of the novels I started writing during my masters. One is a young adult novel, Branded. I wrote the first two chapters of it for a Writing for Young Adults subject. It is a different take on alien abduction, more about the actual abduction and trying to escape, than the aftermath. The other manuscript is based on a short story I submitted during the course called Me, Arizona and the Spike. The story is about the transition of humanity during the technological singularity.  I started to expand that short story into a novel during a vacation break in my masters, writing the first 10,000 words.

Until I started writing this blog post I was committed to the technology singularity novel. But having just remembered how enthusiastically the lecturer responded to Branded, I am seriously considering returning to it. It does have a lot clearer, at least in my head, journey to travel, than the adult novel. I have no idea where Me, Arizona and the Spike will go, let alone finish.

NaNoWriMo has its critics. They say it is just about quantity and not quality, which is true, but that is where editing and redrafting comes in. And they say that 50,000 words does not make a novel. The typical adult novel is over 80,000 words. But young adult novels can be around 50,000 words. Another reason to choose to write Branded (but from previous experience it will probably run well over 100,000 words).

The novel I started in the 2011 NaNoWriMo ended up at over 200,000 words. One of my NaNoWriMo buddies plans to write a number of short stories and articles for his 50,000 words. So there is no need to be pedantic about writing a 50,000 word novel.

I was curious how many works from NaNoWriMo writers have been published. On the NaNoWriMo site there is a list of over two hundred authors whose NaNo novel found a traditional publisher. So it can be done. One of those authors is Hugh Howey, who wrote some of his phenomenally successful novel Wool one November.

As I finish this post, I am drifting towards writing the young adult novel. If I choose it, I might actually finish the first draft of a novel in November. That would be fantastic. It also has the advantage of being fantasy/science fiction so will involve little research as I can invent much of the world it is set in. I have found in previous NaNoWriMos that research can get in the way of writing 1666 words a day. But if that research is skipped it leads to doubts over potential plot holes.

You can join me by becoming my buddy.
Posted by Graham Clements at 5:37 PM 1 comment: Links to this post

Email ThisBlogThis!Share to TwitterShare to FacebookShare to Pinterest
Labels: NaNoWriMo


A few weeks back I declared I would no longer buy print books or ebooks from Amazon, including its subsidiary The Book Depository if I could get them somewhere else. I am sick of Amazon’s predatory and monopolistic behaviour. I don’t like their avoidance of tax, especially in Australia, and I have read they treat their workers badly. More importantly, Amazon seems to be having a detrimental effect on Australian publishers. I decided I would rather pay more for my books and ebooks than contribute to a poor corporate citizen like Amazon.

Not So Difficult to Avoid Amazon

I worried about how often I would have to use Amazon or its subsidiary when they are the only source of a book or an ebook. So I decided to check on the availability of the last eleven books/ebooks I had purchased, eight were print books, three were ebooks. To my surprise, I found all eleven books could be easily purchased from sources other than Amazon or The Book Depository.

But It Will Cost More

I was curious how much more I would end up paying for books. So I checked the price I paid for those eleven books against the prices charged by Amazon and the Book Depository. And then checked those prices against what I would have paid if I had purchased all the books directly from the publisher or from a bookstore.

Surprisingly, I purchased some of the books cheaper from bookstores than their current prices on Amazon or The Book Depository. Overall, the books were cheapest on Amazon, but to get a book sent out to Australia costs around $10, so unless I bought all the books at once, it would be cheaper to get them from The Book Depository as it doesn’t charge postage.

If all three of the ebooks were bought from Amazon it would cost $15.95 as compared to $18.58 if they were downloaded directly from the publisher. That is $2.63 more or 88 cents more per ebook. The gap would be just 34 cents per ebook if Amazon paid the GST.

So overall, I would have paid $13.71 less for the nine available books/ebooks if I had purchased them all from Amazon or its subsidiary, about $1.50 a book. That works out to about an extra $30 a year for books I buy. I can live with that.

There will of course be the added cost of postage if I get print books mailed out from the publisher.  But of the last eight print books I bought, seven of them were purchased in bookstores.
Posted by Graham Clements at 7:02 PM 5 comments: Links to this post

A Review of Margaret Atwood's Maddaddam


Maddaddam is the third book in a Margaret Atwood apocalyptic science fiction trilogy that began with Oryx and Crake, followed by a prequel, The Year of the Flood. Maddaddam is a sequel to both of the earlier books.

The novels are set in a future that could be just around the corner. The Year of the Flood is set in a world on the brink of collapse due to environment degradation and the rampant and totally unethical business operations of a mega multi-national. Everything has been privatised, including law enforcement, and government welfare services are non-existent.

The story revolves around a commune of refugees from the world, who live in an abandoned apartment block. They grow food on its rooftop and recycle the detritus of society. The commune is led by Addam, who is set on getting his followers ready for the inevitable collapse of civilisation. Much of the story concerns Toby, a woman who escapes to the commune to avoid certain rape and murder at the fast food restaurant where she had worked.

Oryx and Crake is set after a virus, created by scientific genius Crake, decimates the population of the world. Only a few humans survive along with a small group of a new species of genetically engineered humans. A species created by Crake, so they are called Crackers. They are resistant to the plague. The Crackers are a gentle and innocent species that don’t require clothing and eat the abundant genetically engineered foliage that has spread across the planet. The Crackers have built in defences like urine that warns off dangerous animals, and they have a big desire to procreate.

Oryx and Crake achieved the rare distinction of a being science fiction novel that was short-listed for the Booker prize.

In Maddaddam Toby and Zeb join up with the Crackers to survive the threat of Painballers - drug addicted psychopathic killers created for the future’s violent entertainments. But Maddaddam is not just an thriller/adventure novel, it is a contemplation on the propensity of humans to destroy themselves and the world around them. The novel asks if the world would be a better place without humans, instead filled with a more community minded and environmentally friendly species like the Crackers. A world were a less dominate main life form is on more of a level playing field with other genetically engineered animals.

Maddaddam differs from the other two novels in the trilogy with its humour. Much of the humour is provided by the naive interactions of the Crackers with the humans.  The Crackers lack of understanding of human emotions such as greed, lead to many questions that can only be answered with concepts unfamiliar to them.

As with The Year of the Flood, Toby is a very engrossing main character. She has the strength of mind to do what she thinks is right, while dealing with many personal insecurities, especially around her relationship with Zeb. She appears to be the opposite polar of Zeb, who is full of bravado of what he has done to survive.

As usual, Atwood’s prose flows like a gentle meandering creek. She is so easy to read. This would have helped Maddaddam top a Goodreads’ poll as the best science fiction novel of 2013.

Maddaddam ends the trilogy with hope. Hope for an Earth that might rebound and sustainably provide the needs for all its life forms, including the few surviving humans. It is a worthy final book in an engrossing and thought provoking trilogy, one of the best science fiction apocalyptic series ever written.

The novels all have the added advantage of being standalone volumes without obvious hanging endings requiring the reading of another novel.
Posted by Graham Clements at 6:56 PM No comments: Links to this post