Even though I no longer buy books or ebooks from Amazon, I am still interested in their prices and the potential impact they might have on the publishing industry. So I have decided to continue my periodic survey of the price of the top 100 bestselling ebooks on Amazon.  I checked the bestseller list at around 2PM today and this is what I found.

Compared with recent surveys, the number of ebooks on the list at 99c continued to fall.

The number of ebooks at $1.99 dropped after a rise in August.

The number of ebooks selling at the guru nominated price of $2.99 rebounded to just about average levels after reaching its lowest number in August.

The number of ebooks on the list at $2.99 or less rebounded to a near record high. It appears that consumers are after cheaper ebooks once more.

ebooks at $3.99 seemed to have bottomed out, with eight being the new norm.

After a spike in August, the number of ebooks on the list at $4.99 has returned to near average.

The trend continues for 2014 of less ebooks priced $7 or more making the top 100 bestseller list.

Overall it appears that the price of ebooks making the bestseller list is going down, mainly due to a rise in those at $2.99.

Email ThisBlogThis!Share to TwitterShare to FacebookShare to Pinterest
Labels: ebooks

2014's Small Screen Science Fiction: the Good, the Bad and the Inconsistent. 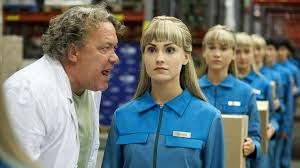 I have watched a lot of science fiction on television this year. A lot of short series, which I appreciate because there is less padding. Some of the science fiction was very good, some of it inconsistent, some of it pretty ordinary. Let’s start with the good.


SBS2 screened some good science fiction this year, much of it second seasons. The standout series was the second season of Real Humans. A series set in an alternative Sweden where robots called Hubots are common. The series tackles the issue of androids interacting with society from many angles. It explores the robots as sentient beings and ponders if they will attempt to take over the world. It has humans being infatuated with androids, and also using them as sex toys. It has humans, one dead, one badly burnt, uploading themselves, or at least attempting to, into hubots. It also explores the violent reaction of those afraid of technology against the androids. So it covers many areas through a number of stories that overlap. Real Humans is a brilliantly written series that is full of ideas and mostly believable characters. The second series was as good as the first and left enough storylines unresolved for a third series.

Utopia is set in a near future England where a group of people have stumbled upon a plot to….well you will have to watch series one first to find out what the conspiracy is. It is an extremely violent series, full of quirky characters and visually unique as strong greens, reds and yellows are in many shots.

Tatiana Maslany in Orphan Black still amazed with her multitude of cloned characters. But the series did not seem to go anywhere. Additional layers were added to the conspiracy surrounding the clones, but at the end a solution seemed no closer. Still it made enjoyable viewing.

Series three of Continuum was screened on Syfy this year. It is a time travel series. A group of terrorists escape their execution and travel back in time to try and stop the world being controlled by a mega corporation. A police officer is caught in the time travel wash of their escape and finds herself trying to stop them from altering her future.

The series had a slow start, but I am glad I persisted, because in the third season it really picked up. There has been a long story arc of the police officer questioning the future she was fighting for, in the third season her agenda changes, as does that of the terrorists.

Another show I persisted with was Extant. An astronaut in a solo research station in space for 13 months returns to earth and discovers she is pregnant. While her husband has created an android child which he is trying to turn into a sentient human being. It took a while for Helle Berry to nearly convince me that she was an astronaut, and it took even longer for Goran Visnjic to convince me that he was more than just a nervous stilted actor. The series had a few gapping plot holes, like why wasn’t the astronaut placed in isolation for months after being exposed to a deadly parasite. But the two main story arcs did manage to come together at the end of the series. I don’t think they should make a second season.


Guess, come on, anyone who is a science fiction fan will have this series on the tip of their tongue when inconsistency is mentioned. It is a series that has maintained this inconsistency for years. And this year, many of us were hoping that a new lead actor would get the writers, especially the head writer, to write more consistent good quality scripts with lots of suspense. The massively inconsistent show was Doctor Who. This year there were fewer bad episodes. If the season had been full of episodes like Flatline and Listen, it would have easily been the best science fiction show of the year. I thought the narky and serious Peter Calpadi a vast improvement on the flippant Matt Smith.


The 100 should be retitled the 100 Gaping Plot Holes. It is set a couple of hundred years in the future, earth has been devastated by a nuclear war and the survivors live in a large orbiting space station. But their systems are failing so they decide to send 100 juvenile offenders down to earth to see if they survive. I was willing to let the writers get away with having the earth habitable only 100 years after a nuclear war, but then…

The 100 morons, I mean juveniles, are packed into a shuttle which is supposed to land near a large warehouse of food, but because of two extra-stupid morons, the shuttle crashes 20 kilometres away from the warehouse. I was stunned at how stupid the writers think viewers are when they sent five people to walk the 20kms and carry back food for the other 95. According to an acquaintance who has watched the whole 13 episodes the plot clangers don’t improve. I only watched two episodes.

Starcrossed is about original as all those terrible rip-off movies on the syfy channel. Aliens crash land on earth. They just happen to be nearly exactly like humans except for some tattoos on their necks – so their pretty faces aren’t messed up. The aliens go to school and try to fit in. They might as well be African Americans in the sixties, that is how old this story is. I watched only one episode.

The writers of the remake of the Tomorrow People should have watched the vastly superior Alphas before sitting down to write. Then they would have learnt a bit about original characterisation, instead of creating a show with lots of pretty boys who spend an awful lot of time bare-chested. This is obviously a show for teenage girls who daydream about having a pretty boy use their special powers on them. The show has a premise, but who cares about that.


I still have to watch a few more episodes of the second season of Revolution to judge it. Like Orphan Black it seems to want to cover much of the same ground as the first season, but with none of the ideas and no superb acting. I am also yet to watch series three of Falling Skies and series two of Under the Dome, which I wish had followed the book a bit more closely and only gone for one season.
Posted by Graham Clements at 9:48 PM 2 comments: Links to this post 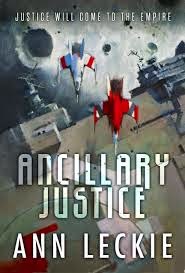 After reading about all the awards Ann Leckie’s Ancillary Justice had accumulated, I just had to read it. It won the 2014 Nebula, Hugo and Arthur C. Clarke awards for best science fiction novel. I was also intrigued by it being told from the viewpoint of an artificial intelligence.

The novel is set thousands of years in the future and begins with an ancillary known as Breq on a quest on an isolated ice planet. She seeks a special weapon to kill the leader of the Radch, Anaader Mianaai. While on the planet, Breq rescues a former comrade Seivarden, who had become a drunk and a thief, who then reluctantly accompanies Breq on her quest.

Extended flashbacks take us back nineteen years when Breq was connected and controlled by her starship. In alternating chapters we find out why Breq wants to kill Anaader Mianaai, a feat that seems impossible, or at least pointless, as Anaader Mianaai has multiple bodies in many locations over her huge empire.

An interesting thematic device in the novel is that the Radchaai do not distinguish people by gender. Every sex is referred to as she. This has the reader trying to work out, along with Breq, whether a character is a he or a she. To aid in her quest, Breq assumes the identity of a non-Radchaai. She worries her true identity will be revealed if she incorrectly refers to a male as a she.

When Breq is still part of the Justice of Toren each unit is privy to the thoughts and actions of the others, so the story is often told from multiple ancillary unit viewpoints. The jumping from the mind of one ancillary to the next is handled very well by the author.

Breq is a very believable creation. The novel is written in first person so it is all spent in Breq’s mind. As an ancillary her emotions are kept in check. If ordered to kill she complies without hesitation. Breq makes no moral judgements about the Radch and the ruthless way they kill those who resist assimilation. But Breq is loyal, and when that loyalty is destroyed she decides to act.

The story is a suspenseful slow build. It is more of a mystery novel than an action or thriller novel. It is full of detail as the AI observes the world around it and decides how to interact with it, but not in a robotic way, as Breq has been observing and interacting with humans for hundreds of years. She is no Data or Seven of Nine. She is much more real and complex than they are.

Ancillary Justice is an intelligent novel for readers that want to engage with and think about their science fiction. It is Anne Leckie’s first novel.
Posted by Graham Clements at 10:26 PM 5 comments: Links to this post