A Review of Steve Amsterdam's What the Family Needed 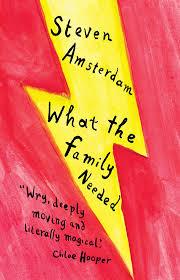 I enjoyed Steve Amsterdam’s award winning, apocalyptic, climate change novel Things We Didn’t See Coming, so I was quick to purchase a copy of What the Family Needed. Calling Things We Didn’t See Coming a novel might be bit of a misnomer as it is a collection of short novellas. But they all feature the same character and are told in chronological order. Amsterdam uses the same technique with What the Family Needed, but this time each story is told from the viewpoint of a different character.

What the Family Needed begins with teenagers Giordana and Ben arriving at their Aunty Natalie’s house with their mother Ruth. Once again their mother has deserted her husband. Giordana is looking forward to the normalcy of her Aunts family’s stable life, but she has not factored in the fantasies of their son Alek.

Gordiana feels her mother does not care about her opinion of her father, and that she is taken for granted by her mother. It’s like she is invisible. While being entertained by one of Alek’s made-up fantasy games he asks her to choose: invisibility or flight? She chooses invisibility. Minutes later she wishes she could sneak down stairs and listen to what her mum is saying about her dad, and she suddenly becomes invisible.

Ben, Ruth, Natalie, cousin Sasha, Uncle Peter, and Alek all tell stories of their own. The stories are in a chronological order so they don’t overlap or show an incident from a different viewpoint.

Ben’s story starts a few years after Giordana’s. He is unemployed and full of regret for marrying and having a baby too young.  He wants to be free.  Guess which super ability he gets.

Ruth is a nurse who wants to make the lives of her patients and families as comfortable as possible, if only they would really tell her what they really wanted.

Sasha has never been able to form a long-term relationship, he would do anything to get his lover to return his love.

Natalie is busy, too busy to help and fix her delusional son Alek, if only she was more efficient.

Peter just wants his family to stay stable and for nothing to change.

They each acquire a super ability, but their abilities have mixed results.

The novel is written in a wry tone. Most readers will identify with the desires of the characters: wouldn’t it be nice to find out what people are saying when you are not around, or to flee a boring life, or if nothing ever changed.

The novel ends with Alek’s story. It is clear from the start of the novel that he is the catalyst for the gaining of super abilities by his relatives and other members of his family. I was very keen to find out how and why. Alek’s story offers surface answers but not the bottom of the iceberg answers I was looking for. I felt a bit duded, disappointed.

Things We Didn’t See Coming had a sense of urgency about it, a demand that we change, and a character that changes to suit the environment. While What the Family Needed shows that change can be hard to cope with, even when magic intervenes. In the end, it says be careful what you wish for because the change might not be worth it. It is a gentle novel, perhaps too gentle.
Posted by Graham Clements at 6:19 PM 1 comment: Links to this post