My writing efforts for August. 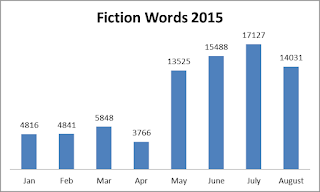 I have finally made time to write my monthly blog post about my fiction writing efforts for the previous month. I have been extremely busy writing, editing, critiquing and being sick. Yep, my ulcerative colitis has come back at the wrong time, but when is a good time for it?

I continued writing my novel, adding another 8549 words. I am very close to the end of the first draft, so it was with great reluctance that I stopped to write a short story I had committed to finish by the end of August.

I started the short story on the 17th of August, hoping to finish it before attending the Melbourne Writers Festival at the end of the month. At the end of August, I had written 5,582 words of it and it still was nowhere near finished. The story is for a Christmas anthology created by members of the Australian Writer’s Forum.

I critiqued another story for critters.org, and then I committed to critiquing a whole novel on critters. Fortunately, the writer writes a lot briefer manuscripts than I do, with it being 66,000 words. By the end of the month, I had critiqued the first six chapters, about 10,000 words.

I finished reading the very good classic, I am Legend by Richard Matheson. It is one of the original apocalyptic novels. In it, a virus decimates the population leaving one lone survivor to battle vampire like creatures. It was made into at least two films, one of the same title and the much better The Omega Man. The novel is very different from both films. Although written 60 years ago, the novel still cracks a punch. I then started reading Dust, the third book in Hugh Howey’s apocalyptic Wool series.

I went to the festival for the third year in a row. The only science fiction author I saw on a panel kept on apologising for his book being science fiction, so I did not buy it. I learnt a bit from a panel with the editors of Peter Carey and Jonathan Franzen (I’ve read a number of both author’s books.) Best author talk I went to by mistake. The festival organisers changed the venue without telling me, but my ticket still got me in to see Daniel Handler (aka Lemony Snicket). He was there promoting a novel for adults called We are Pirates, and with a title like that, I just had to buy it. Overall, the festival was not as good as the two previous years. I hope to write more on it in upcoming posts.

I had one non-fiction article published on Divine this month, about a casting call for an Australian web-series Aliens Vs Crips, where four people with disabilities try to survive an alien invasion.
Posted by Graham Clements at 10:28 PM 1 comment: Links to this post