My writing efforts in September 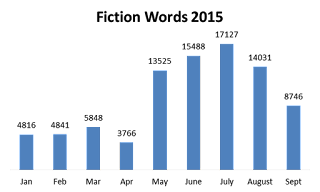 Once more it has been a while since my last post. I have been extremely busy writing and doing other writerly things, as you will see in my update for October.  But this post is about September.

In September my Ulcerative Colitis decided to remind me of its existence, so I had to take some medicine, which made me extremely tired for just over half the month.

At the beginning of September, I was writing a short story for a Christmas anthology that a few members of the Australian Writers Forum are creating. I finished the first draft of the story on the same day I started taking the medication. The story at that stage was 9,800 words, 3,800 words over the suggested word limit.

I redrafted the story over the next few days, reducing it to 7,400 words. I then printed it out, proofread and edited it many times over the next couple of weeks. I found a lot to change each time, and eventually reduced the story to 7,200 words. On the last day of the month, I finally submitted it to the group for critiquing. I then returned to the novel I had been writing.

I think one reason I made so many changes when proofreading was the story being in third person. I had not written in third person for a long time. My tiredness probably had something to do with it too.

All up, I estimate that I wrote 8,746 new words for the month, much lower than for the previous months (as shown in the graph), but I expected my word count would drop when editing. I averaged 291 words per day. And only on nine days did I reach my quota of 500 words. I proofread/edited for at least two hours on about six days.

I read bugger all due to tiredness. I’m still reading Dust, the third book in Hugh Howey’s Wool series.

I had another article up on Divine in September. It is about smart homes for people with disabilities. Divine has been having computer problems, which has meant my story hung around on its front page for nearly all of September. I also wrote the second and fourth articles listed on the site for that period. But I did not write any articles in September due to...
Posted by Graham Clements at 7:05 PM 2 comments: Links to this post