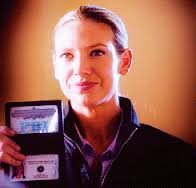 Reading a bit about female heroes coming to the fore in science fiction because of Star Wars: The Force Awakens and Mad Max: Fury Road. I reckon female heroes have been around for years, but it does depend on your definition of what a hero is. Here are some that I think fit the label:

Posted by Graham Clements at 1:43 PM No comments: Links to this post

I have gift for those who read this blog. A Christmas anthology, containing a fantasy story written by me. I have just fixed the epub and pdf file links as they did not appear to be working.

It has a diverse range of stories written by writers from the Australian Writers' Forum.

Merry Christmas.
Posted by Graham Clements at 5:08 PM 2 comments: Links to this post

My writing efforts in November 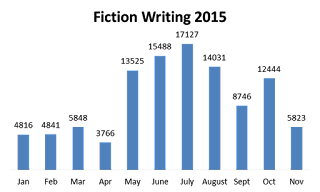 The graph to the left shows a drop in my word output in November, which suggests I spent a lot less time writing. That is not the case. My word output dropped because I was proofreading/editing and redrafting. I continued redrafting a novel and I also spent a week trying to finalise a long short story that was due for submission at the end of November.

I ended up writing about 5820 new words of fiction for the month.

I received three critiques of my story during the month. One was a very useful full edit, another was just a comment agreeing with the suggested edits of a previous critique, and the other… Well, first some background.

I did a copy edit/critique of one of the other stories written for our Christmas anthology. It was a non-fiction story about a Christmas spent in an Aboriginal community. I really enjoyed the story, I found it informative and was interested to read about life in an Aboriginal community written by someone who had lived in one. I made a fair few edits to the story, many for what I thought were repeated grammar errors.

The writer was not happy with my critique or the other one he had received. He said that as his writing was not good enough, he would withdraw his story from the anthology, and quit our writing group. I wrote back to him that it was a shame he was withdrawing his story and I thought it would be a worthy addition to the anthology.

He also said this about my story:

“I printed it out and commenced reading but was unable to finish it...........without saying anything I gave it to my wife to read. She couldn't finish reading it, either and her 'critique, was summed up in two words, .... "It's weird."”

As you can see from his comment, one of his various writing problems is the overuse of ellipses.

But I did not take his comments to heart as they appeared to be written out of spite. I also don’t think my story is that great, and I am still making changes to it.

In contrast to the upset I caused the writer of the Christmas story, another writer was very happy with my critique of his 66,000 word novel. It took me just on three months to critique and it was the first volume of a very interesting science fiction trilogy. I offered to critique the sequel. I also critiqued another story for the anthology, and again the writer seemed appreciative of my comments.

Again, I did very little reading for the month.

A New Article on Divine

An article I wrote on an audio description trial on the ABC’s iview service went up on Divine a few days ago. Please have a look, because in years to come, when your eyesight is failing, you might need audio description when watching television.

Posted by Graham Clements at 10:20 PM 2 comments: Links to this post