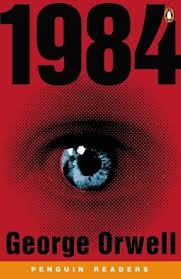 A personal essay I wrote for uni about the influence two books, 1984 and Stephen Donaldson's Lord Foul's Bane, had on my reading and writing.

The best books, he perceived, are those that tell you what you know already.

In my mid-teens, George Orwell’s novel Nineteen Eighty-Four told me what I already suspected. It confirmed my thinking that everyone I knew – my iffy school mates and more definite school hates, as well my teachers and my parents – were all just like me, desperate to fit in because they were too scared not to. Nineteen Eighty-Four was also full of ideas about how society could be manipulated, and had me thinking what our future world might be like. A few years later I escaped to university and found myself surrounded by outsiders. One of them shoved Stephen Donaldson’s Lord Foul’s Bane into my hand. It had a very flawed hero who I identified with. Both of those books had a great effect on my future reading as I searched for more stories that had flawed outsider characters exploring ideas about future societies. I soon found science-fiction novels and magazines were full of such characteristics.

In an introduction to Nineteen Eighty-Four, Professor of Politics and Contemporary History Ben Pimlott claims most of its characters are only two-dimensional. As a teenager, with a limited experience of life, I can’t remember thinking the characters needed to be more fleshed out, they seemed real enough to me. Pimlott goes on to claim that without its political ideas, Nineteen Eighty-Four is just an adolescent fantasy “of lonely defiance, furtive sex and deadly terror”. I really identified with the “lonely defiance”. Winston Smith seemed to be a lot like me, someone who didn’t fit into the world, but unlike me, he resisted the pressure to fit in. His resistance had me questioning my own desire to conform and accept my allotted space in society. Nineteen Eighty-Four had me wanting to read more about outsiders who rejected the need to fit in. Outsiders who were not so much rebelling, more just living their own versions of life.

Nineteen Eighty-Four was much more than a call to defy my peer’s low expectations for me. It was a novel full of ideas that sparked my imagination, and metaphors that explained the world. Ideas like Newspeak and how language could be used to influence and censor thought. Ideas like the Ministry of Truth and how history could be changed to justify those in power. Ideas like Big Brother and how we are all under surveillance and being scrutinised. Nineteen Eighty-Four had me wanting to read more idea driven books. It also had me thinking whether future societies would be oppressive or utopian, or something in between. At the time I read it, I was an avid fan of Doctor Who and Star Trek on television, which were shows full of outsiders, such as the Doctor and Spock, and ideas, such as time-travel and transporters. Those shows also explored what future societies might be like. Maybe in the future the world will have one government, like Star Trek’s Federation. These thoughts led me to reading science-fiction.

I soon found that science-fiction novels and magazines are full of what I was searching for. They are full of ideas, like genetically-engineered immortality, or living in virtual worlds. They are full of characters who don’t fit in, such as child maths prodigy Francis Conway in George Turner’s The Sea and Summer or the genderless clone Breq in Ann Leckie’s  Ancillary Justice. Science-fiction suggests we might colonise other planets, like in Kim Stanley Robinson’s Red Mars, or an outsider scientist might create a virus that nearly kills everyone, like in Margaret Atwood’s Oryx and Crake. Science-fiction novels and magazines had me hooked.

Three years after I read Nineteen Eighty-Four, I appeared to have escaped the clutches of Big Brother to live in a residential college at La Trobe University. A fellow escapee recommended and loaned to me Stephen Donaldson’s Lord Foul’s Bane. In that novel Thomas Covenant is magically transported from modern day America into a world full of sorcerers, spirits, giants, demons and humans. Covenant was brought to the land to battle the evil sorcerer Lord Foul. There was an obvious reason for him being chosen: the magical power of his white gold wedding ring, but why did they choose such a flawed human being?

Covenant must be one of the most flawed heroes of literature. Rejected by society due to his leprosy, he is bitter at his treatment and hates himself. He still wears a wedding ring in the deluded hope that his wife might return. Once transported to the other world, a teenager befriends him, and he rapes her. At the time, he did not think the world was real, while as a reader I was also trying to decide if it was “real”. Covenant doesn’t trust himself for most of the novel, yet by the end of the novel this very flawed character sacrifices himself to save a world that he is beginning to think might be real. Stephen Donaldson says in fantasy the world is an expression of its characters, so Lord Foul is an expression of the contempt Covenant held for himself. Therefore, Covenant is battling himself. This battle within himself had me identifying with him. On a number of occasions my real-life emotions and uncertainty mirrored Covenant’s. He was one of the first really flawed characters I identified with.

Lord Foul’s Bane had me wanting to read more novels with flawed characters. It had me rejecting a lot of American science-fiction due to its formulaic heroes: alpha males full of moral certainty. They usually have a token flaw, like an inability to talk to women, in an attempt to make them appear, what Professor Pimlott might call, more than just two-dimensional. One such near flawless hero in Ben Bova’s Moonrise infuriated me so much that I cheered when he died, suffocating alone on the moon’s surface. In my search for more realistic characters, I found Australian science-fiction full of flawed characters, such as Spider, a penniless, divorced and unmotivated repairman in KA Bedford’s Time Machines Repaired While-U-Wait.

Nineteen Eighty-Four and Lord Foul’s Bane not only affected what I read, they also affected what I write. I predominately read and write science-fiction stories that are usually set in the future and explore ideas about society through flawed characters. In my writing, many of my main characters don’t care about fitting in. Like Winston Smith, I hope my writing will tell many outsiders what they already know.

Posted by Graham Clements at 4:10 PM

A wise and thoughtful post,Graham!

Nothing more interesting to the writer than flawed characters. Without them, there can be no drama. One that hate's himself though. That's interesting.

1984 had a profound effect on me too. I re-read it last year.
I haven't heard of Bane.
I bought The Sea and Summer based upon your recommendation.
I think science fiction readers tend to be astute and intelligent generally. They(we) want something more than what standard fiction offers us. A glimpse at the alternatives, as we're already pondering them.

1984 has always had me thinking that most people live peer driven lives and not the lives they want to live.

If you do decide to read Lord Foul's Bane, it is part of a trilogy, The Chronicles of Thomas Covenant, and then there is a very good sequel trilogy. In recent years he wrote a four book further series, which I got stuck on in the second book, it had very little to do with Thomas Covenant and also spent 600 pages going in a circle, ie the the book virtually ends where it started. So the first seven books are great, the eighth was crap. And I haven't read the rest.

Donaldson would be my most read author, with three series, The Gap Into, which is pure science fiction, and Mordant's Need, which is fantasy.

It had me rejecting a lot of American science-fiction due to its formulaic heroes: alpha males full of moral certainty.

Don't know if you have heard about all the white male whining over the main characters in the new Star Trek series, but it's both funny and sad. At first, all we saw in the trailers was an Asian lady as captain and an African-American lady as first officer. A lot of white fan boys were literally up in arms screaming about "white genocide" and "the producers are ramming diversity down our throats."

With the appearance of Jason Isaacs as the captain of the Discovery things have calmed down. But I have to wonder did any of the moronic white male protestors ever really watch Star Trek and understand what it was trying to promote.

I was not aware of the complaints, but they do seem to have missed the point of Star Trek. Perhaps they should watch that episode were a planet had two "races" one with a white left side of the face and a black right side, the other with a black left side of the face and a white right side. And just look at the mixture races/sexes of the original crew - Voyager had a very diverse crew too.

There have been a few people upset about the next Doctor on Doctor Who being female too. I am looking forward to it as it might force the writers to look at different stories and different ways of telling stories.

My complaint in my essay though, was more about the moral certainty of near flawless characters in some of the American science fiction I have read. I like flawed characters who question not only whether they are doing the right thing, but who get selfish every now and then and do things they want to do no matter the cost to others.The crews of the ships on Dark Matters and Firefly come to mind.